A Brief History of the Dodge Viper

Home » A Brief History of the Dodge Viper

A Brief History of the Dodge Viper

The Dodge Viper has been around the track a few times since it was first introduced to the public in 1989. From television to video games, there's not a lot it hasn't done. It has certainly grown more fun and more powerful with each passing year. 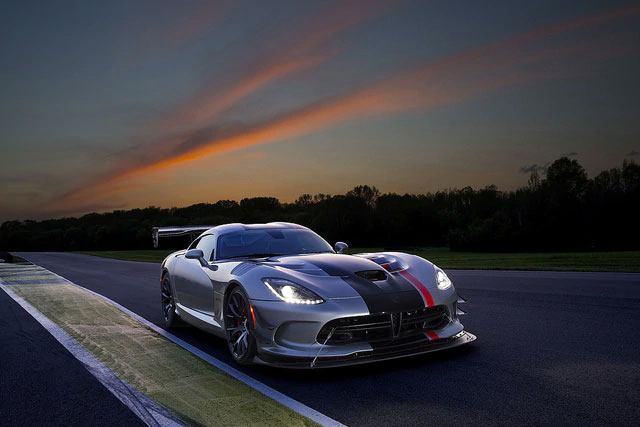 In 1989, the Viper prototype was rolled out at the North American International Auto Show in Detroit. It made such a splash that the story went worldwide. Enthusiasts sent in checks, asking to make a down payment on the model. While the checks were returned, the automaker formed a team of 85 engineers to bring it into production as soon as possible, and it took three years of work to get it ready.

The next sighting of the car came in pre-production when the Viper took a turn as the pace vehicle for the Indianapolis 500. It was only fitting that the world get a look at this speedy car in what might be termed its natural habitat. The car's long hood and short trunk would become its trademark look. This muscled ride would go on to achieve automotive icon status.

The original prototype had foreseen a V-10 iron cylinder block. It had promised 300 horsepower and 450 lb.-ft. of torque. While the engineers could have stuck with this, they turned instead to Lamborghini. The racecar-oriented automaker developed an aluminum block engine that could do more with less weight. This engine cranked out 400 horsepower and 465 lb.-ft. of torque thrust. It had a top speed of 165 mph (about 266 km/h). This Viper could go from 0-97 km/h sprint in about 4.5 seconds.

The very first Vipers cost US$50,000 in 1992. There were only 196 made. Originally this car didn't have a roof. It was meant to be stored indoors. There weren't even door handles because the owner could climb inside without opening the doors. Soon the production line added a soft top to satisfy more buyers. Then it added a coupe top to satisfy even more buyers.

In 1994, the Viper became the focus of a futuristic television series. A crime-fighting vehicle, this Viper used its speed to gain the edge over villains. Of course, it also had some interesting capabilities, and each year of its three-year run, it added more. From the outset, it had battering rams, probing arms, a grapple hook launcher, a hologram projector and twin weapon pods. Armored plating was a given. Over the years, it gained machine guns, missile launchers, a flamethrower, a net launcher, and high-powered lasers. This futuristic Viper even had a cloaking device at one point.

Even as the TV series pushed imaginary technological boundaries, Viper technology in real life was evolving. In 1996, the Viper R/T took to the streets with a bump in horsepower and torque. Still tweaking the body, Dodge added a removable hardtop to the convertible line-up. It also exchanged steel suspension components for aluminum. This dropped the small car's weight and added to its performance capabilities.

Following the R/T later that year, the 1996 Viper GTS went two directions at once. On the one hand, it created a double-bubble roof for the Viper. This was to allow the driver and passenger to wear helmets. On the other hand, it got more civilized than it had been. Standards included air conditioning, airbags, and power accessories. The new sprint speed was a flat four seconds.

The next big leap was in 2002 with a redesigned look. The sharp, angled bodywork pushed the Viper in a modern direction. The new SRT (Street and Racing Technology) engine propelled it further faster. Weighing less than the previous engine, the SRT also generated more power. It kicked out 500 horsepower and 525 lb.-ft. of torque. The SRT Coupe engine produced 510 horsepower and 535 lb.-ft. of torque. The new sprint time was 3.7 seconds. The new top speed was 189 mph (about 304 km/h). These track-worthy models also offered new exterior colors and a special Mambo black interior.

In 2006, the Dodge Viper proved itself quite capable on the racetrack. Driver Greg Crick pulled off wins in two major races to earn the Australian GT Championship. He was driving the Dodge Viper GTS ACR.

The 8.4-liter V10 made its debut in 2008. This Viper cranked out 600 horsepower and 560 lb.-ft. Special electronic engine controls and mechandyne cam-in-cam variable valve timing were among its most revolutionary features. A new transmission was added. This Tremec 6060 had triple first-gear synchronizers. The higher gears had double synchronizers. The Dana rear axles added a speed-sensing limited-slip differential. Grip, cornering and driver feedback were improved by these and other changes. The car's top speed increased to 202 mph (about 325 km/h).

In 2010, Viper production was halted, and some limited editions were sold as a final farewell. The hiatus didn't last for long. In 2012, the 2013 SRT Viper made its debut at the North American International Auto Show just as it had done a few decades before. Only now it was under the new brand SRT. The Stryker, as it was nicknamed, came loaded with dash technologies and other goodies. Unlike the barebones car it once was, this Viper offered up both speed and comfort. The GTS added leather upholstery with color accents. That Viper had a 640-horsepower engine that kicked out 600 lb.-ft. of torque.

The SRT Viper also joined the world of gaming. It made appearances in the Forza Motorsport franchise. Enthusiasts will find it in Need for Speed editions, including Most Wanted, Rivals, No Limits, and Gran Turismo 6. It also makes appearances in Driveclub and Real Racing 3.

After a brief stint as its own brand, the SRT model folded back into the Dodge brand, returning the Viper to its point of origin. The SRT technology remains important to the success of the car, however.

The 2016 Dodge Viper comes in five trim levels. The 645-horsepower engine can do the sprint in 3.2 seconds. The top speed is 206 mph (about 332 km/h). The ritzy interiors and top-notch dash technology is matched by improved damping and better ride quality. Advanced traction controls keep it on the straight and narrow. Still, these are just better manners on a bad boy, writes the Car Connection. This is one car that will always have a hard time in the slow lane.

From the initial 300-horsepower prototype to the remarkable 645-horsepower Viper of today, this car continues to amaze driving enthusiasts. Its forays into racing and its media appearances have earned it even more fans. The new aerodynamic wing on the GCR edition suggests a future yet to come.