Bring Back the Chrysler Crossfire

Bring Back the Chrysler Crossfire 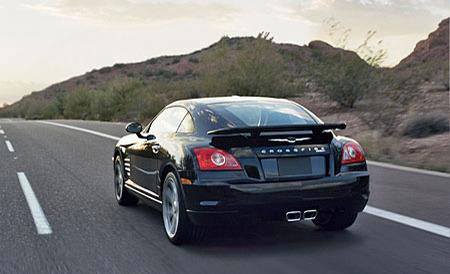 Many cars are discontinued despite being popular with the public and critics alike. Sometimes it's a case of a company going under but often it is just a decision made from above to move in a different direction. At Caledon Chrysler, we don't get to choose what models continue from year to year, but there are some we wish were still gracing our showroom floor. One of these happens to be the Chrysler Crossfire. In existence from 2004-2008, the Chrysler Crossfire was a two-door sports car available in three trims (convertible, coupe, and SRT-coupe). What really made it stand out from other cars of the day was that it was a collaboration between the highly skilled engineers of Chrysler (interior and exterior) and Daimler-Benz (drive-train). To understand why we have such good memories of this two-seater, we need to take a closer look at some of its outstanding features.*

When it came to performance, the Chrysler Crossfire was built on the Mercedes-Benz R170 platform. Made in Germany, this high-performance platform usually featured a standard 3.2-liter SOHC V6, 18-valve engine that produced 215 horsepower at 5700 rpm and 229 lb.-ft. of torque at 3000 rpm. Some models and trims also included a supercharger that was created by the performance specialists at AMG. While it depended on which year and trim you drove, most of the time you had a choice of five or six-speed transmission, double wishbone front suspension, multi-link rear suspension, and four-wheel independent suspension. You could expect to go from 0-60 in as little as 4.8 seconds in the SRT-6 trims and get between 11.2L - 13.8L/100km city and 9.4L/100km highway. There was also a rear spoiler, alloy wheels, and standard high-performance tires. As far as safety, the Chrysler Crossfire had four-wheel ABS ventilated front and solid rear disc brakes, a full complement of airbags, a passenger airbag deactivation switch, and an engine immobilizer.

One of our favorite parts of the Chrysler Crossfire was the sleek and luxurious interior. In many ways ahead of its time, the interior was designed by Chrysler in America and had available features like Alcantara suede for the seat bucket seats, a telescopic leather steering wheel that matched the rest of the interior's color, dual zone A/C, an attractive silver-matte center stack, and dual vanity mirrors. Though it's technology features would seem dated today, the six-speaker Infinity Modulus audio system with AM/FM/CD, and a 240-watt digital amplifier was basic but clever in its design.  There were also remote keyless power door locks, security alarm, power mirrors, Universal garage door opener, and a navigation system.

In the end, the best part of the Chrysler Crossfire was its drivability. Our customers at Caledon Chrysler still speak of its excellent handling and comfortable ride. While we don't expect to see the Chrysler Crossfire make a comeback anytime soon, we would be thrilled to have it be part of our current lineup of 2017 Chrysler vehicles.

The entire team at Caledon Chrysler would love to hear which Chrysler cars from the past you'd love to see reborn, so don't be afraid to let us know! If you want to learn more about our current crop of new and pre-owned cars and SUVs, please contact Caledon Chrysler today!

*Most specifications and features based on the 2005 Chrysler Crossfire.