Chrysler has struck out in an exciting new direction with the 2017 Pacifica. The all-new minivan is unlike anything consumers have seen before, literally redefining the segment on many fronts.

When people first see the vehicle, it looks sleek and more like a crossover. As the sliding doors open, it becomes obvious that the Chrysler Pacifica is much more than meets the eye. Before you make any judgements about the new model for yourself, learn about its top ten standout features. Each one could literally revolutionize how families get around and enjoy time on the road together. 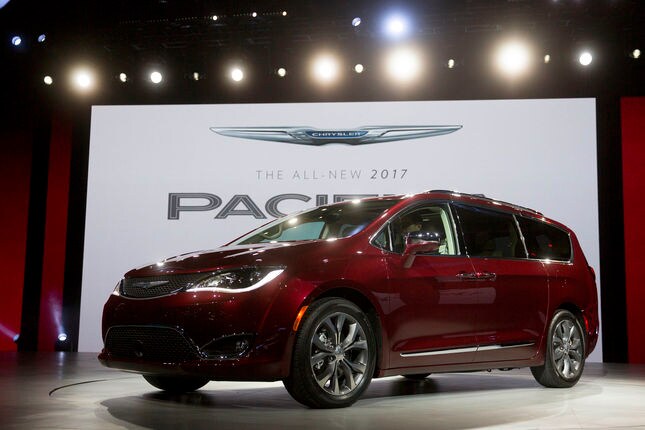 Parents often have their hands full, making opening things an unexpected difficulty. Chrysler thought of this when designing the Pacifica. The available hands-free power dual sliding doors and liftgate are incredibly handy. All it takes is waving a foot under the rear bumper or the door to activate the sensor, with the vehicle taking care of the rest.

Hearing "are we there yet?" repeatedly during a trip is anything but fun, which makes the optional Uconnect Theatre system a huge help. Two 10-inch touchscreens are mounted to the backs of the front seats, giving anyone on the second row an excellent view of the show. Occupants can watch Blu-rays, DVDs or media on USB drives.

Instead of stopping there, as many other systems do, Chrysler kicks the entertainment factor up another few notches. Several built-in apps and games keep kids entertained during long road trips, keeping things fresh for hours.

All vehicles have seats, but the Pacifica takes things a few steps further. Up to eight people can fit inside at a time, with plenty of room in all three rows. Because parents might need more than a couple of LATCH-compatible spots, Chrysler offers up to five seats with these special anchor points.

The Stow 'n Go Assist is a huge benefit, shifting the front seats forward to provide better access to the storage bins in the floor behind them, all with the press of a button. Owners can place gear in the compartments, or fold down the second-row seats for carrying large items. With a press of the same button, the front seats slide back into place.

In addition, the second-row Easy Tilt feature makes reaching the third row easy. Pressing a single button slides the seats forward enough to create a pass-through, even if a child seat is installed.

Backing out of anywhere can be tricky, especially in a larger vehicle like the Chrysler Pacifica. An available 360-degree Surround-View Camera helps eliminate some of the guesswork. The system actually is made up of four different cameras that are mounted to the exterior of the mini-van. That setup allows for bird's-eye views of not only the vehicle, but also its immediate surroundings. Everything is shown in beautiful clarity on the optional 8.4-inch touchscreen.

Most people don't expect a mini-van to handle well, but the 2017 Pacifica is an exception. Chrysler uses a new front-end strut setup and a trailing-arm configuration for the rear suspension. Engineers tuned everything carefully for a nice balance between comfort and performance. When combined with the electric power steering, drivers enjoy a sharpness that's downright engaging, making even short trips fun.

It's not easy to keep a clean house with children, and that same can be said for keeping a clean vehicle. With the available Stow 'n Vac system, parents can more easily clean up messes while on the go, which is a huge plus. The fact that the shop vacuum has the ability to deal with large debris only increases its utilitarian appeal. Even better is the washable bin all of the waste empties into. It makes for easy maintenance. The RIGID onboard vacuum is able to reach each and every corner of the interior, making it incredibly practical for the rigors of daily life.

It's inconvenient to not have enough cupholders in any vehicle, especially for longer trips. After all, keeping a drink in one hand is uncomfortable and distracting, even for backseat passengers. Chrysler includes plenty of cupholders for all three rows of seating, eliminating this problem. The middle seat for the second row can fold down, providing even more cupholders.

For those who crave excellent sound quality, Chrysler offers an optional Harmon Kardon setup with 20 speakers. It can fill all three rows of seating with music, audio books or whatever else owners desire. The setup comes standard with noise cancellation, cutting down on wind and road noise. This means occupants don't have to shout to hear each other, and drivers don't have to turn up the volume so everyone can hear softer music clearly.

Plenty of vehicles have a sunroof. Some come with two. The 2017 Pacifica goes even further with a three-pane panoramic sunroof. It allows plenty of natural light to flood the interior, plus provides excellent views of the sky above, towering buildings in crowded cities or even the stars at night. In many ways, it's one of the best forms of entertainment.

When it comes to advanced technologies, Chrysler really delivers with the 2017 Pacifica. The Hybrid model is particularly compelling, because it can achieve an amazing 2.9 gasoline litres equivalent per 100 kilometers (97 MPGe) for city driving. That translates into not only fewer emissions, but a lower operating cost.

Owners can run errands and do short trips without burning any gas. The electric-only drive mode can allow for up to 48 kilometres of travel. Plugging in the vehicle, it takes as little as 2 hours to replenish the battery. The estimated driving range for the Pacifica Hybrid is over 850 kilometres, with a full charge and tank of gas.

Drivers stay updated on information about the hybrid system through the 7-inch color touchscreen in the centre stack. It can show efficiency data, plus power usage, helping to manage the technology effectively.

More Articles About the Pacifica:

Is the 2017 Chrysler Pacifica the Greatest Mini-Van Ever Made?

The Chrysler Pacifica Hybrid and the EVIP $14,000 Rebate

Getting to Know the 2017 Chrysler Pacifica Hybrid